During the last decade of the Huron-Wendat Museum’s existence, an exhibition has been touring every two years, each one showcasing Huron-Wendat artists and artists from elsewhere, important objects from our collections as well as themes that are often little known and innovative. 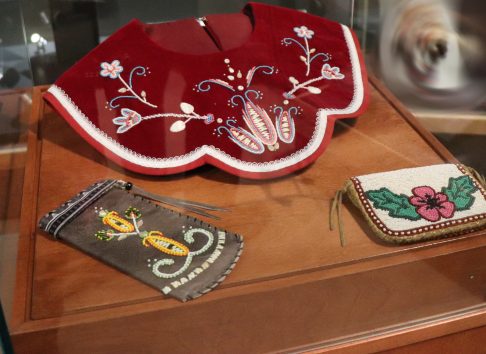 Originally created by our museum and presented within our walls from December 14, 2017, to April 29, 2018, the exhibition moved to the Maison des Jésuits in Sillery in the summer of 2019, on land that served as a trading post for the Huron-Wendat even before the arrival of the Jesuits.

Produced in collaboration with the Centre de développement de la formation et de la main-d’oeuvre huron-wendat (CDFM), the exhibition showcases ornamental techniques that Huron-Wendat women have practiced and passed on over the centuries: beading and embroidery made with materials from nature such as moose hair and porcupine quills.